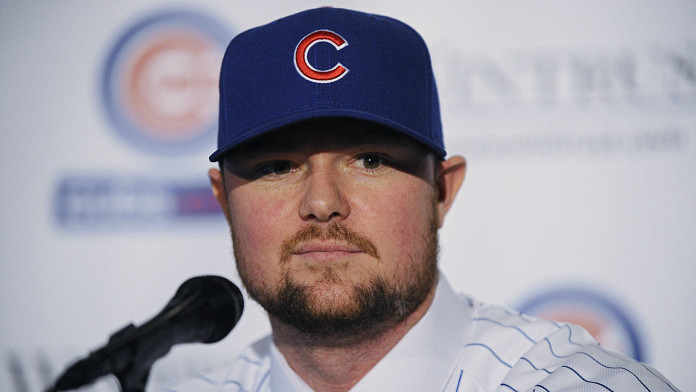 As Jon Lester prepares to start Game 1 of the NLCS tonight in New York, the 31-year-old Cubs pitcher says that it was Theo Epstein’s arrogance that ultimately won him over when making his decision in free agency last year. I’m sure that the $155 million helped, but that’s not the point here.

Epstein has been building this young Cubs team for years now, and one of his tactics to recruit Lester to Chicago was showing him videos of guys like Kris Bryant, Jorge Soler, Kyle Schwarber, and the other young guns hitting monstrous home runs in the minor leagues, but Lester, while impressed, was still on the fence. His past relationship with Lester helped, but there were still concerns.

As a quick reminder, after spending his entire career with the Boston Red Sox, Lester was traded to the Oakland A’s last summer during their playoff push. What you may not remember is that in return, the Red Sox acquired Yoenis Cespedes, who now plays for the New York Mets, and will be one of the biggest threats to Lester tonight and to the Cubs’ chances of advancing to their first World Series in 70 years.

Lester certainly has his share of World Series experience. He won the final game of the 2007 Fall Classic, and went 2-0 as the ace of the 2013 Boston Red Sox championship team, so it’s only natural for him to want to get back to that position. Epstein was keenly aware of this during the recruitment process, and once again, his past relationship with the two-time champion came into play.

Epstein told him: “Look, we’ve known each other too well for too long for me to bullshit you. We’re going to be really young. But if things break our way with some of these guys …”

Break the Cubs’ way things certainly have. After a brilliant 97-65 regular season, a 24-game turnaround from last year, the Cubs won the wild card game against Pittsburgh, dominated St. Louis in the NLDS, and now Lester finds himself in position to become the first Cubs pitcher to win an NLCS game since Matt Clement won Game 4 of the 2003 series against the Florida Marlins. Theo Epstein saw this coming, and that is what made up Lester’s mind in the end.

“I think the biggest thing that sold me, not only on these young guys, but the whole organization, ” Lester said, “was just how arrogant [Epstein] was about it. And I mean that in a good way. Just how confident he was in these guys because these guys were not going to be failures.”

One of the biggest of these young guys is rookie phenom Kris Bryant, who with his .275 average, 26 home runs, and 99 RBI, is poised to win the Rookie of the Year, and he knows how valuable it is to have somebody like Jon Lester in the locker room, especially come playoff time.

“He’s just been great for us young guys, kind of showing us the way.”

As for Lester’s comments on Epstein’s “arrogance”, the President of Baseball Operations had the perfect response.

I don’t think there’s anybody on this Cubs team who is lacking in confidence right now, especially Jon Lester. Game 1 gets underway tonight as Lester takes on the Mets’ Matt Harvey. Coverage begins at 6:30 CDT on TBS.