Now I get it. It wasn’t just the crazy wind at Wrigley Field on Monday night that caused a record-breaking six home runs in the Cubs’ 8-6 win in Game 3 of the NLDS. Okay, maybe that had something to do with it, but it probably didn’t hurt that Hall of Famer Ryne Sandberg was on hand to throw out the first pitch. 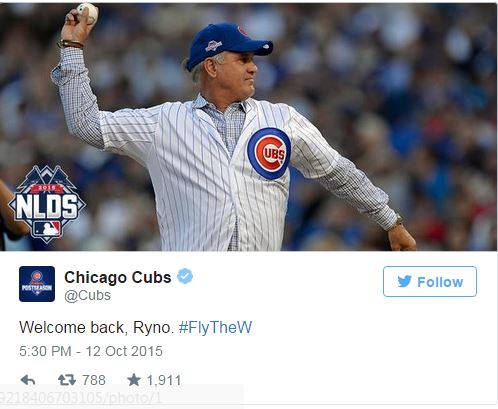 If you’ll remember correctly, the Cubs legend, who was wearing an Ernie Banks jersey tonight, made a name for himself by smashing a couple of home runs in the epic “Sandberg game” on June 23, 1984 against….well, the St. Louis Cardinals of course. He finished that game going 5-for-6 with two home runs and seven runs batted in. Maybe these young Cubs just wanted to impress the old guy, who nobody even knew would be on hand to throw out the first pitch tonight.