Home Chicago Remember How Much Ron Santo Hated The Mets? 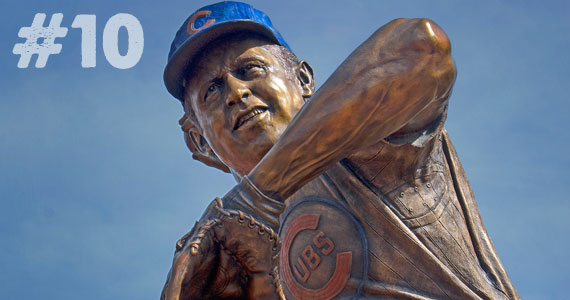 If there was one thing that Hall of Famer Ron Santo loved more than the Chicago Cubs, it was hating the New York Mets. Seriously, NOBODY hated the Mets more than Ron Santo.

Of course, this all started in the 1969 season, yes, that season of the “Miracle Mets”. Yet, the problems didn’t start with the collapse; it actually started in a series in July. After multiple miscues from center fielder Don Young that cost the Cubs a game, the Cubs feisty third baseman made a few comments to the New York media about Young, and while Santo says the remarks were ill-timed, he did not like how they handled the situation, and things were on from there.

Later that season, during a series at Wrigley, Mets pitcher and Hall of Famer Tom Seaver beat the Cubs and mimicked Santo’s signature heel-click. “That’s my thing. I’m kicking the habit. The losing habit. It’s my salute to the Bleacher Bums. I’m working on a double kick for the World Series.”

Well, we all know what happened next. In mid-August, the Cubs had a 9.5 game lead on the Mets. On September 9, in a critical game at Shea Stadium, Santo stood in the on-deck circle, when out of nowhere, a black cat jumped onto the field and ran right past him as he waited for his at-bat.

The Mets would win that game, 7-1, would take over the division lead the next day, and wouldn’t look back, finishing a full eight games ahead of the Cubs. For good measure, the Mets would also win the 1969 World Series.

“THe picture of me and the black cat is the one I’ve had to autograph the most over my career, ” Santo once said.

I’m sure he just loved that every single time.

That 1969 season set the stage for the next 40 years. Santo would continuously take shots at the New York media throughout the remainder of his playing career, and after a 15-year absence from the game after his retirement in 1974, the nine-time All-Star found a new way to take jabs at New York as a member of the Cubs radio announce team. Personally, I never considered Santo to be an announcer, but just a die-hard Cubs fan who got to call the games. Pat Hughes would join him in 1996 to create one of the most entertaining tandems in sports radio, and every time that the Cubs played the Mets, Santo would hold nothing back in talking about his disdain for New York.

Things only got worse in 2003 during the Cubs opener at Shea Stadium. As Santo stood for the national anthem on a chilly day in New York, the heater in the broadcast booth burned his toupee, only furthering his dismay for that stadium.

“I would come back here personally to blow it up. I’d pay my own way. Maybe even just to watch it.”

Even in 2007, when the Chicago Cubs were in a fight for the division title, the Cubs needed help from the Mets in a series against the Milwaukee Brewers, and Santo was asked who he’d be rooting for that week.

“Huh, God, why would you ask me that? See, that’s not a fair question. That’s an unfair question. So…you know…I’m not…I have no comment on that.”

Classic. As his health began to decline over the years due to his ongoing battle with Type 1 diabetes, Santo would always take his allotted time off when the Cubs visited the Big Apple, basically refusing to take the trip anymore. He did make a trip to Citi Field, the new Mets park that opened in 2009, and claimed he liked it, but still didn’t miss a chance to insult the city itself.

Ron Santo passed away in 2010, but his spirit will definitely be in New York tonight as the Cubs begin the NLCS against the New York Mets. For 41 years, all the Cubs Hall of Famer wanted was revenge on the team that ruined his best chance for a championship. Tonight, his beloved Cubs begin their chance to get it for him.