It’s been exactly one year since Oscar Taveras, the 22-year-old future star of the St. Louis Cardinals, and his girlfriend, 18-year-old Edilia Arvelo, were killed in a car accident in the Dominican Republic. Details were somewhat sketchy early on, but it was later revealed that Taveras was drunk at the time of the accident with a blood-alcohol level five times the legal limit in his home country. This news created a complicated legacy for Taveras, who was honored this season by the Cardinals with a special patch on their uniforms, a decision that many did not agree with, which you can read all about HERE. 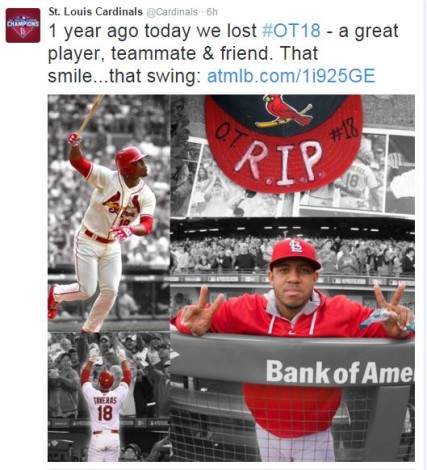 Okay, that seems about right for a one-year anniversary, don’t you think? Naturally, there were a few replies that stayed on the gentler side.

Well, that’s nice. But let’s not forget that this is the internet and more often than not, things are going to go in a different direction.

And we’re off. Will somebody step up to argue?

Well, of course somebody will. This is Twitter, and it actually looks like it’s a Cubs fan coming to Taveras’ defense.

There’s a little back and forth, but nobody is getting too upset just yet. Andy K is backing up his argument with some facts (never a bad thing), but Brian is still willing to forgive (not a bad thing either). See how I’m not taking sides on ANY of this.

There it is. Things are starting to heat up now. At least they’re not attacking each other…

…oh wait, it just got personal. But it wouldn’t be an internet fight without a little smack talk now, would it?

And now it’s a REAL internet fight because the original topic doesn’t even get a mention in that tweet.

It’s at this point that Brian seemed to drop out of the conversation, but that didn’t keep a few others from getting involved as well. 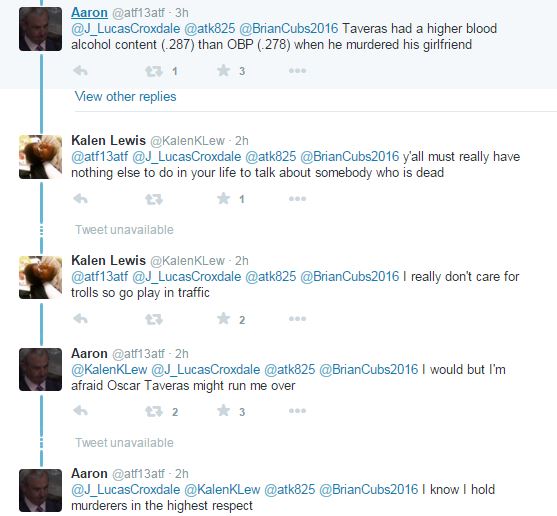 Now it’s getting really personal, even with the original two participants out of the picture. Aaron even showed off his research skills by bringing baseball stats into it. 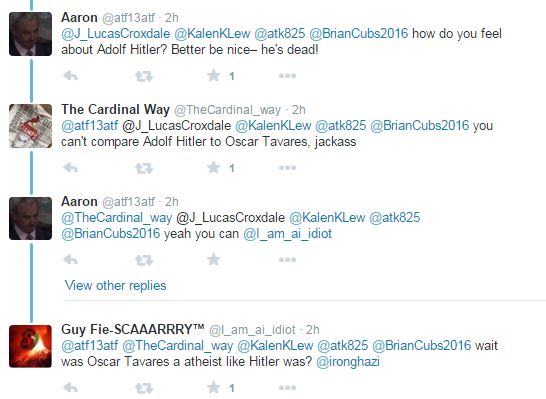 Oh damn…now they’re comparing Oscar Taveras to Adolf Hitler. You just gotta love Twitter.A man and his girlfriend died, and Hitler shows up in the argument about it. I don’t know where you come out on this argument, but was anybody else thinking this?