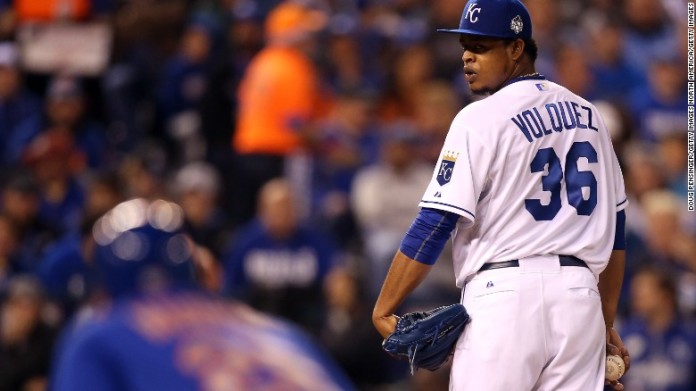 I don’t know if it was the full moon or what, but yesterday’s World Series Game 1 was insane.

In the first inning, Kansas City Royals shortstop led off the bottom half by hitting the first pitch he saw for an inside-the-park home run. The last time that happened was the very first World Series in 1903.

In the fourth inning, the game just went off the air for a few minutes after FOX experienced some technical difficulties. Not only were viewers left in the dark, but the game had to be delayed because of the replay factor.

Then there was the substance, which looked a lot like pine tar, on the shin guard of Royals catcher Salvador Perez, which created a little bit of a stir. 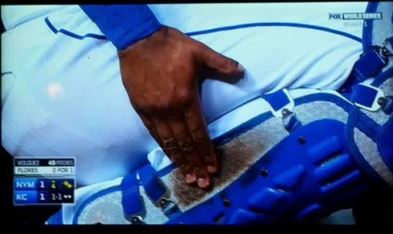 Hmmm. Royals. Pine tar. Sound familiar? Okay, it was nothing like the George Brett incident (Google it, youngsters), and it might not even have been pine tar. Even Kansas City manager Ned Yost didn’t know what it was.

If you say so. Then there was the Eric Hosmer error in the eighth that put the Mets ahead, the Alex Gordon homer in the ninth to send the game into extra innings, and the Hosmer redemption in the 14th as he knocked in Escobar on a routine sacrifice fly to give the Royals a 5-4 victory in a five-hour classic.

Yet, the crazy moments in this game pale in comparison to what happened before the game even got started. Only a few hours before Kansas City’s Game 1 starter, Edinson Volquez, took the mound, the Royals received word that Volquez’s father had passed away due to complications from a heart condition. It was Volquez’s wife that had called general manager Dayton Moore, but then had a special request: that the team not tell him until he was done pitching the biggest game of his life.

The problem with something like that in 2015 is that just about everybody who was on social media last night had heard the news, but Volquez himself had not. However, for those who weren’t, they wouldn’t know the news until later either, as FOX refused to talk about it on the air.

So it became business as usual for Edinson Volquez on the mound. He gave up three runs in six innings before being taken out, at which point Yost kept his promise not to reveal the news.

As most pitchers do when they’re done for the night, Volquez retreated to the clubhouse after exiting the game, where he was met by his family. He did not factor in the decision and left the stadium before the game was over.

He is the third Royals player to lose a parent within the last three months. Third baseman Mike Moustakas’ mother passed away on August 9th, and pitcher Chris Young lost his father on September 26th. In a strange twist, Young, who is scheduled to start Game 4, was one of the only people who knew about it before the game, as Yost would have gone to him to pitch had Volquez found out and decided to leave.

“I certainly sympathize with the pain [Volquez is] going through tonight, ” Young said. “It’s hard, it’s really hard. I just really can’t describe. I just feel sorry for him and feel his pain.”

It’s not known at this time when Volquez will rejoin the team. Game 2 gets underway tonight at 7:07 CDT. Things couldn’t possibly be any crazier tonight, right?