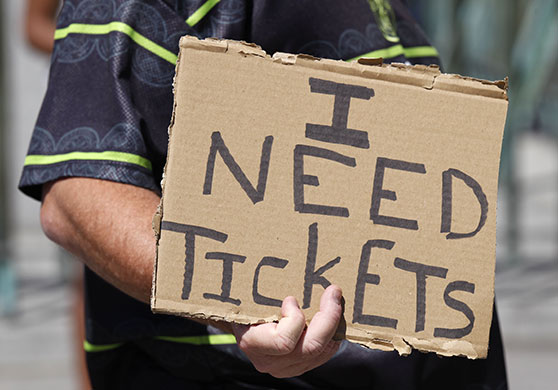 Heads up Cubs fans…and I suppose Cardinals fans too. WGN is reporting that around 100 counterfeit tickets were confiscated at the gate before last night’s NLDS Game 3. Here’s a few pics and what to look out for if you’re heading to Wrigley this afternoon for Game 4.

In the picture below, the real ticket is on the left and the counterfeit is on the right. The difference really isn’t much, but there is a slight color difference, and the font for the barcode is slightly off as well.

Once again, the real one is on the left. The biggest difference to the fake is the lack of MLB watermarks behind the writing. You’ll notice the one on the left has them there.

In this picture, the real ticket is on the right with the official white background. The counterfeit ticket on the left has a gray background.

Cubs spokesman Julian Green had the following to say regarding the matter:

Beware of anyone selling tickets through third party websites. If you’re interested in going on the secondary market, you should try to seek out approved secondary sellers, ” he said. “You hate that fans who are spending their hard-earned money and are looking to witness Cubs postseason baseball at Wrigley Field have to come all the way here and find out that they were victims of fraud.