The Arizona Fall League has long been the place for the hottest young players in baseball to hone their craft and show off their skills, and Chicago Cubs prospect Willson Contreras is doing just that.

In 39 at-bats for the Mesa Solar Sox, Contreras is hitting .308 with 1.032 OPS, including Thursday’s 2-for-4 effort with a two-run home run in a 5-3 victory over the Surprise Saguaros, bringing his total to three for the season with seven runs batted in.

“I feel really good at the plate right now, ” Contreras said. “I come to field early and get my work in, and then during games I focus in and see what the pitcher has and go from there.”

Contreras is currently ranked as the Cubs No. 10 prospect, and continues to impress after a breakout year at Double-A Tennessee, where he hit .333 in a career-high 126 games to win the Southern League batting title. He’s also looking to improve defensively.

Signed out of Venezuela as a third baseman in 2009, the 23-year-old moved to catcher in 2012, and played 75 games this year behind the plate, getting the everyday job after Kyle Schwarber moved up to the big leagues. Showing off a very strong arm, he gunned down 27 of 97 base stealers, a very respectable 28%, but realizes that this chance to play in Arizona can only make him even better.

“I’m working on my game-calling this fall, and it’s getting better, ” he said. “I’ve been talking a lot with [pitching coach Steve Connelly], who’s helped me a lot, and I’m also working on my receiving.”

The Cubs youth movement is real. Even with guys like Schwarber, Kris Bryant, Jorge Soler, and Addison Russell on the roster, it’s good to know that if somebody goes down, there’s guys like Willson Contreras, who just happened to win the Cubs’ Minor League Player of the Year Award, just waiting for their chance to shine. 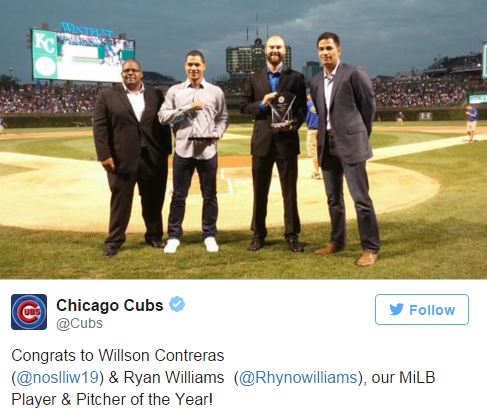