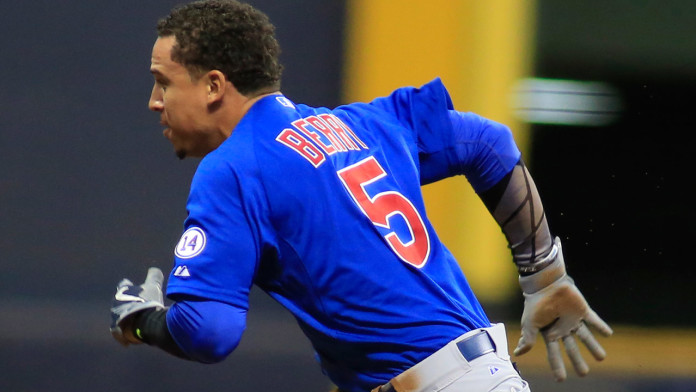 While most of the Chicago Cubs roster will look the same as it has throughout these 2015 playoffs, they did have to officially remove Addison Russell due to the moderate left hamstring strain he suffered in Game 3 of the NLDS against the St. Louis Cardinals.

He was replaced by Javier Baez at shortstop for the remainder of that series, and that continues to be the plan moving forward, but to fill his official roster spot, the Cubs have gone to outfielder Quintin Berry, who joined the team in September after signing a minor league contract on August 24.

Berry, known primarily for his speed, isn’t likely to see a lot of playing time except in key pinch-running situations. After being drafted in 2006 by the Phillies, he bounced around the minor leagues with Philadelphia, the San Diego Padres, the New York Mets, the Cincinnati Reds, and the Kansas City Royals before making his debut in the majors in 2012 with the Detroit Tigers, replacing an injured Austin Jackson. He played in 94 games that year, hitting .258 with two home runs and 29 RBI, and was 21-for-21 stealing bases, good enough to make Detroit’s playoff roster that year. He went 5-for-26 during the Tigers run to the World Series.

He started 2013 back at Triple-A, but was designated for assignment that June before being picked up once again by Kansas City, who in turn traded him to Boston. He played 13 games for the Red Sox, hitting .625, which landed him on yet another playoff roster. He didn’t have an at-bat, but made three pinch-running appearances and stole all three bases he attempted, and got himself a World Series ring.

In 2014, he signed a minor-league deal with Baltimore, but played in only ten big league games, and signed back with Boston earlier this year before being released on August 21. The Cubs picked him up three days later, and he appeared in eight games with only one plate appearance.

This is who will join Berry as the Cubs start play tonight in New York for Game 1 of the NLCS.