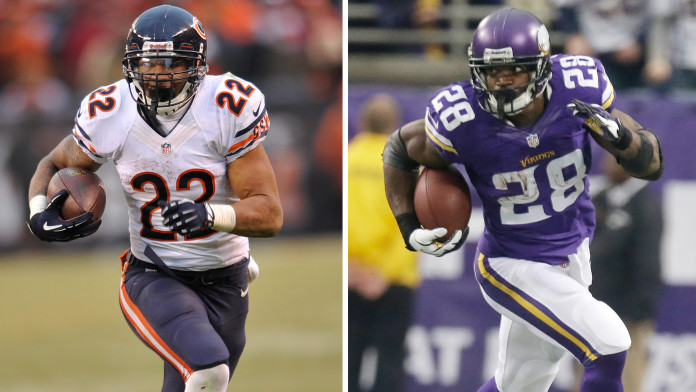 The Minnesota Vikings will be in Chicago this weekend to face off with the Bears, and just about every time this matchup occurs, the comparisons and arguments start on who has the better running back.

Is it Adrian Peterson or Matt Forte?

Only this time, Adrian Peterson himself is jumping in on the conversation, sort of. When asked who Forte reminded him of, the Vikings running back shifted sports.

Stephen Curry. That’s pretty high praise. If that’s true, then the Bears veteran rusher is on a path to the MVP and leading the Bears to a Super Bowl victory. For the benefit of those who actually don’t watch the NBA, Stephen Curry won the MVP last year and led the Golden State Warriors to a championship. You’re welcome.

However, the only reason Peterson responded this way was due to a discussion with the Kansas City media when the Vikings were playing the Chiefs a couple of weeks ago. Jamaal Charles had called himself the LeBron James of football during training camp. Of course, with all of his injuries, he’s more like the Derrick Rose of the NFL, but I’m not here to discuss that. In response, Peterson had this to say:

So, let me get this straight. Matt Forte is Stephen Curry and will lead the charge to Super Bowl 50, and Adrian Peterson is Michael Jordan and has six championships to his name. Am I missing something?

David Montgomery Is One of The Hottest Breakout Picks For 2020