The most recent details about the Patrick Kane incident have people scratching their heads, to say the least. Despite reports about biting and scratching during a sexual encounter between Kane and the victim, the rest of the story surrounding the night seems to have some unanswered questions remaining.

The encounter with the victim reportedly started at SkyBar before heading to Kane’s house.

The woman alleges that Kane invited her and a female friend to his home for a private party after they met him last Saturday night at SkyBar, a popular nightclub on Franklin Street, the sources said.

SkyBar’s owner, Mark Croce, told The Buffalo News his take on Saturday night after receiving numerous media requests to speak about the investigation.

But Croce told The News that he and several of his employees noticed a young woman “hanging all over” Kane at SkyBar for at least two hours that night, putting her hands on his arms and “being very forward, very flirtatious with him.” He said he does not know the woman and does not know her name.

“It was almost like she stationed herself near him and was keeping other women away from him, ” Croce said. “I noticed it and kind of laughed about it.”

Not only that, but Croce went on to say that his employees also noticed the behavior of the “young woman” and are willing to cooperate with any portion of the investigation as needed.

Croce said the woman and a female friend “followed” Kane as he left the nightclub with a couple of male friends around 3 a.m. last Sunday.

“I don’t know if this is the same woman who made the rape allegation against him, ” Croce said. “I only know what I saw that night on my own premises. If you’re going to ask what happened between them after they left that night, how would I know?”

The News could not independently verify whether the woman Croce described is the same woman who made the rape complaint to Hamburg Police.

Croce said he has been asked by the Erie County District Attorney’s Office to make a statement, and he said he and bar employees will cooperate in the investigation.

“The DA’s investigator asked me for a list of all the people we had working that night, and their contact information, and I gave it to him, ” Croce said.

Towards the end of the interview, Croce offered his opinion.

“I’ve got no skin in this game. I am only telling you what I observed, ” Croce said. “(Kane) was acting like a typical young guy his age, out having fun with some of his buddies. A lot of people were coming up to him, asking to have pictures taken with him. He was a gentleman. Pat had a couple of drinks and maybe a couple of shots. He was having a good time, but he wasn’t stumbling or doing anything obnoxious.”

Croce said that, in his opinion, some news media reports make it appear as though Kane is guilty of rape.

“This is America, the place where you are still innocent until proven guilty, ” Croce said.

These comments, along with the most recent details surrounding the night have a lot of people on social media questioning the story coming from the victim. Sports Mockery’s Facebook post from this morning generated over 70 comments (so far) from Blackhawks fans, most of which are in support of Kane after hearing the latest details about the night.

Jamie English I find it hard to believe that if this girl was raped, she wouldn’t have screamed her ass off to where her friend who was also in the house would have came running to help her.
Yet they both leave Kane’s house together . HMMM! I smell a fish

Michelle McDaniel Hamil I think a young lady smelled a huge payday with a lawsuit against patrick kane.

Donjuan Bermudez So you go to a guys house at 4am. With another woman present. Not just any guy but patrick kane. You start walking into other rooms without your friend and he follows you into the room. He jumps on you and you dont scream for your friend stop it. This is another ben rothlesberger or kobe story.

Debbie Guillen Hebda He followed her into a room and overpowered her and raped her? I really find this hard to believe. Besides he has a girlfriend. Why would he need to force himself on someone else? If she was being raped in another room where was her friend? Why didn’t she scream? Why didn’t they call the police right away? So many questions. A lot of things just don’t add up.

Ashley Wallon Lets be serious here, Kane does not need to rape any woman. They flock to the dude! Just like this chick did!

Dom Giammicchio Really? He bit her? That’s how he over powered her? That sounds like some
Bullshit… I think she wanted him to
Bite her while they had sex and is now using it against him

Josh Gar She got raped apparently with her friend in the next room and after the rape immediately call her family instead of police and decided to go to the hospital instead of calling and waiting for police.

These comments come from people in Chicago, if you want to know what people in Buffalo think then read this. You’ll get the same responses. There’s also been a trending hashtag on social media #ISupport88 that everyone else have been using to show their support. 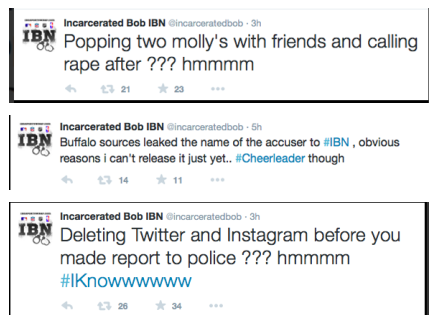 An ongoing debate between supporting Patrick Kane and showing sensitivity to the victim is inevitable. It’s pretty much impossible to do both during the fact gathering process. Rape is an incredibly complicated crime that creates a ton of difficulty when it reaches the courtroom. When involving high-profile athletes cases are much more likely to end in some kind of settlement than actually deciding guilt. The Ben Roethlisberger case settled for “less than a game check, ” Kobe Bryant also negotiated a monetary settlement with a woman who accused him of rape. Does that mean Bryant and Rothlisberger were guilty? In the court of law, no. In terms of public opinion, depends on who you ask.

In 2012,  Los Angeles Kings star Drew Doughty was the target of a date-rape charge but it eventually fell apart after citing insufficient evidence. Which is what happens to a very large percentage of these cases.

Yes, it’s some-what human nature for fans to blindly defend their favorite athletes when faced with a questionable situation. Tim Baffoe wrote a great piece about it here. But…

Those supporting Kane now are simply going off of the facts they’ve heard from the Buffalo News while wisely comparing them to past situations involving celebrity-status athletes. Has it not been mentioned that athletes themselves are the targets for these cases too? When you have millions of dollars, people are going to try and take it through extortion, blackmail and yes, sometimes even filing rape charges. This is the exact kind of thinking that makes rape so incredibly hard on the victim, without the presence of sufficient evidence for the general public to see they are more likely to side with the athlete. It makes the trials harder to win, and it makes the victim’s life more difficult when enduring the drama of getting discredited in public by the defendant’s lawyers during the process.

Judging from the past, these situations tend to end in some kind of monetary negotiation, there has been no indication up to this point that Patrick Kane’s investigation won’t be the same. If there’s more to the story, along with sufficient evidence to back it up, then the general public will pass their judgement at that time. Unfortunately, this becomes a PR battle as much as it does a legal fight. Based on past history of high-profile athletes, and the latest details of the situation, there’s a lot of people who think Kane was the person targeted here.

It’s your opinion to determine if that way of thinking, at this point, is insensitive to the victim or not.