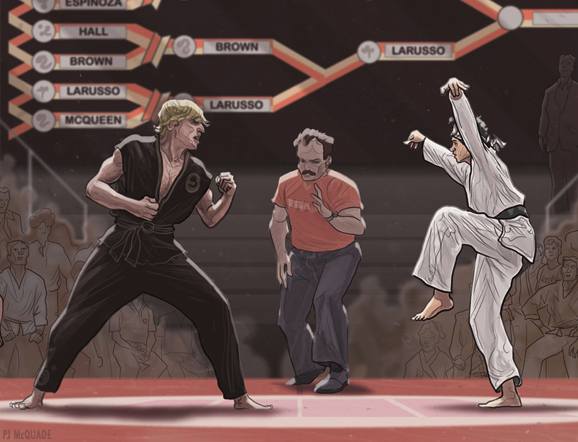 Sports movie songs can be a great way to fire up a team, an event, or yourself. Many sports movie songs have appeared in films over the years. Some are just thrown into an overall soundtrack, where others are synonymous with the flick. It was tough narrowing this down, but here are the top five sports movie songs. Enjoy the clips, and get fired up!

In 1989, the Cubs had won the division for a second time in a decade, which at the time (and still today) is pretty unheard of. One of the star players on that team was Mitch Williams, or known by his nickname, Wild Thing. That same year, the movie Major League opened in April right at the start of the baseball season, and Charlie Sheen’s character Rick Vaughn was nicknamed, Wild Thing. Each enjoyed hearing The Runaways version of the song blaring through the loud speakers. FYI there are a couple F bombs in this movie clip.

Before Jean Claude Van Damn became a household name, and before he became old and wrinkled, he was a pretty awesome fighter. The movie Bloodsport is one of the best demonstrations of his skills. Accompanying the martial arts montage is the band White Lion’s first album title track Fight to Survive.

The fun-loving boys of summer song Centerfield by John Fogerty has always been a great anthem for baseball. The movie Bull Durham encapsulates this song in the film. Baseball is meant to fun, loose, and carefree. The song Wild Thing fits the tough, intimidating pitcher, but Centerfield embraces the joy of baseball, and the fun of going to a ballgame.

The Rocky series has several potential songs that could have made the cut for this list. It is the movie that reinvigorated the modern-day montage. However, the biggest hit of the six films was Survivor’s Eye of the Tiger. It was the theme of the entire third film, and one that can be heard in high school locker rooms and gymnasiums across the country. I, myself have even recorded a workout video to Eye of the Tiger.

The number one song on this list, for my money, stands alone in sports movie songs that fire you up. You’re the Best Around is synonymous with The Karate Kid, as it was actually written for the movie itself. Elisabeth Shue even gift wraps the song for the script when she tells Macchio, “You’re the best!” The song was performed by Joel Esposito and written by movie soundtrack legend, Bill Conti. Conti wrote all the Rocky music, has been nominated for several Emmys, Golden Globes, and Oscars. You can’t tell me that you weren’t doing karate moves in your living room when this song started playing.