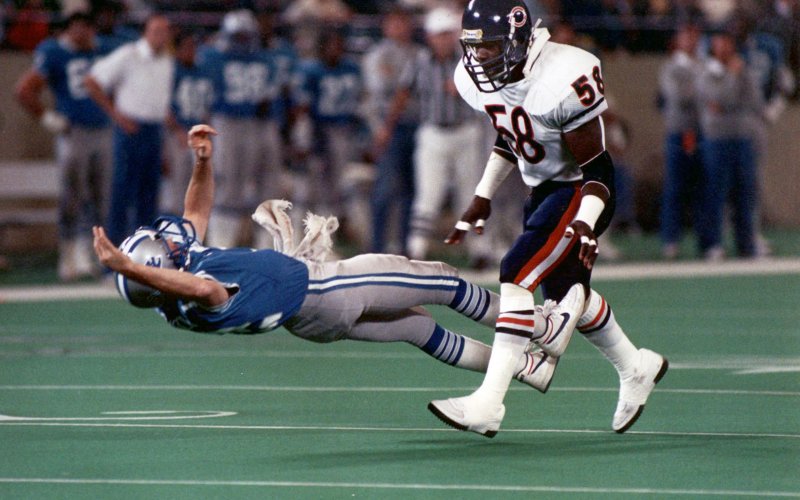 About 95% of the focus from Chicago fans are on the 2015 Chicago Bears and what they will do to recover from one of the most disappointing seasons in recent memory, finishing 5-11 after starting with Super Bowl expectations.  However, from time to time it’s fun to look back at team history to remember better times and remind ourselves that this team was great once and will be again.

Of course all thoughts typically go to the 1985 team that won the Super Bowl and that history-making defense that knocked out, shut down and pretty much humiliated opponents.  Bears linebacker Wilber Marshall was one of their best players that season.  A 1st round pick in 1984, he was in his first season as a starter and already proving his value to the team.  He’d end up finishing with 78 tackles, six sacks, four interceptions and two forced fumbles.

Most people remember him that season for his epic fumble recovery in the NFC championship that resulted in a touchdown to ice the game 24-0.  However, they may forget that before he was knocking out opponents with points, he sent shockwaves through the NFL when he killed a quarterback.

Okay so maybe he didn’t literally kill him but head coach Mike Ditka has a quote he still uses today whenever somebody brings up Marshall.

“I can still the lick he put on Joe Ferguson up in Detroit.  I’d never seen anything like it, I thought he killed him.”

Indeed the violence of this hit can be felt through the screen.  You have to understand Joe Ferguson came into the league in 1973 with the Buffalo Bills.  He was 35-years old and a backup by the time he was with the Detroit Lions.  So his body had already taken some hits over the years.  Not only did Marshall rock him with a full de-cleater, but Ferguson also had the great misfortune of playing on old Astroturf in the Pontiac Silverdome.  This was before modern field turf, when players complained that the artificial surface was too hard to play such a physical game on.

So imagine getting hit like that and slamming the back of your head on fuzzy concrete.  That is basically what happened to Joe Ferguson.  Not that Wilber Marshall cared.  Few on that defense relished the opportunity to crush quarterbacks more than he did.  In fact, the guy who started ahead of Ferguson for the Lions in Eric Hipple would feel that same wrath the next year.

It will be a great occasion when the Chicago Bears defense returns to days like these.