One might not know it from just a casual glance, but history has played a large role in the naming of each and every franchise in Chicago sports. On the surface, some of the names may seem generic in nature, but I can assure you there’s more to it than that.

From the connection which ties the Chicago Bears to the Cubs, to the historic significance behind the naming of the Blackhawks, there’s a whole lot more to these team names than a cool looking logo.

Chicago is home to many different professional sports teams and is one of only four U.S. cities to have teams from all five major American professional team sports.

None are more popular than the beloved Bears.

When this team became a charter member of the American Professional Football Association (APFA) in 1920, the team was located in Decatur, IL, and was named after team sponsor, the Staley Starch Company. This was the norm for several early startup professional football franchises.

The company hired George Halas and Edward “Dutch” Sternaman in 1920 to run the team.

The team moved to Chicago in 1921 and became the Chicago Staleys. Under an agreement reached by Halas and Sternaman with Staley, Halas purchases the rights to the team for a whopping $100, which equates to roughly $1, 250 in today’s world.

In 1922, after team founder/manager and star end Halas completed the purchase of the team, he abruptly changed the name to the Bears. The reasoning was simple,  Halas concluded that because football players were generally bigger than baseball players, and the city’s baseball team was the Cubs, then logically the football team should be the Bears.

The team originally played their home games at Wrigley Field on Chicago’s North Side prior to relocating to their current home, Soldier Field, on the near South Side adjacent to Lake Michigan.

The Bears are one of only two remaining franchises from the NFL’s founding. With only one Super Bowl championship in the bank, this fan base is hungry for another title.

On the surface the name Bulls may seem very generic, but it’s not. During the late 19th and early 20th century, Chicago was the hub of the meat packing industry. The Texas Longhorn, in particular, was a breed of cattle which would be taken by rail from Abilene, Texas and Dodge City, Kansas to Chicago for slaughter and subsequent distribution around the country.

For many years, Chicago boasted the largest stockyard in the entire world.

Richard “Dick” Klein, the club’s first owner, chose Bulls as the nickname for his team when it joined the NBA in 1966, becoming the league’s 10th franchise.

Klein felt the name denoted strength and power, and it tied into the city’s meatpacking tradition and the Chicago Amphitheater’s (first home court of the Bulls) proximity to the famed Chicago Stockyards. The one-syllable directness of the Bulls was also in line with Chicago’s other team nicknames—Bears, (White) Sox, Cubs, and (Black) Hawks.

“We were the meat capital of the world, ” said Klein at the time. “At first, I was thinking of names like Matadors (funny how that worked out given today’s Matadors) or Toreadors, but if you think about it, no team with as many as three syllables in its nickname has ever had much success except for the Canadians. I was sitting around the house, kicking these names around with my wife and three sons, when my little son Mark said, ‘Dad, that’s a bunch of bull!’ I said, ‘That’s it! We’ll call them the Bulls!’ And that’s how the team got its nickname.”

The Bulls enjoyed their greatest success during the 1990s, winning all six of the team’s NBA championships during that time frame, forming a dynasty during the height of the town’s most beloved superstar, Michael Jordan.

The Chicago Blackhawks were founded on September 25, 1926, when the National Hockey League awarded a franchise to Major Frederic McLaughlin, an American businessman and former solider in the United States Army. McLaughlin, a Harvard-educated local coffee tycoon (Manor House Coffee), had no trouble coming up with the $12, 000 entry fee required to join the league upon purchasing the rights from Huntington Hardwick.

The problem now was actually filling out the roster. In an effort to secure players for the upcoming season, McLaughlin purchased the Portland Rosebuds of the floundering Western Hockey League for $200, 000 and moved the nucleus of that team to Chicago.

After acquiring enough players to field a competitive team, McLaughlin, never a big fan of the “Rose Buds” moniker, began to focus his energies on coming up with a new name for the hockey club.

Looking to the past, the former Major found his inspiration.

Having been a commander with the 333rd Machine Gun Battalion of the 86th Infantry Division during World War I, McLaughlin had a strong attachment to the members of his division which aptly called themselves the “Blackhawks division”. The term is derived from a Native American of the Sauk nation, chief Black Hawk, a prominent figure in the history of Illinois after siding with the British in the War of 1812.

McLaughlin could think of no better name for the newest entry into the NHL.

On November 17, 1926, in front of 9, 000 fans at the Chicago Coliseum, the Chicago Black Hawks made their debut, defeating the Toronto St. Pat’s by a score of 4-1. The team’s name was spelled using two words, unlike the military division, until 1986, when the club officially became the “Blackhawks” based upon the spelling found in the original franchise documents.

During his 18 years as owner, McLaughlin would lead the franchise to two Stanley Cup wins, in 1934 and 1938. Let’s just say he was a very “hands on” type of owner, making 18 coaching changes within the 18 years he owned the team.

The Blackhawks’ logo never has spawned protests by American Indians like those against the University of Illinois’ dancing Chief Illiniwek or the questionably named Washington Redskins. Still, it’s a touchy issue for those here of American Indian descent.

Blackhawks management’s policy is not to comment on the issue; however, in the team’s clubhouse, the Blackhawk Indian logo is held sacred. No one steps on it, and it’s kept illuminated.

A few years ago, former coach Denis Savard backtracked on his use of the phrase “Commit to the Indian” when trying to rally the team, but loyal fans repeat it with a sense of determination and enthusiasm. As part of the “Original Six”, this team is blanketed with tradition and prestige. 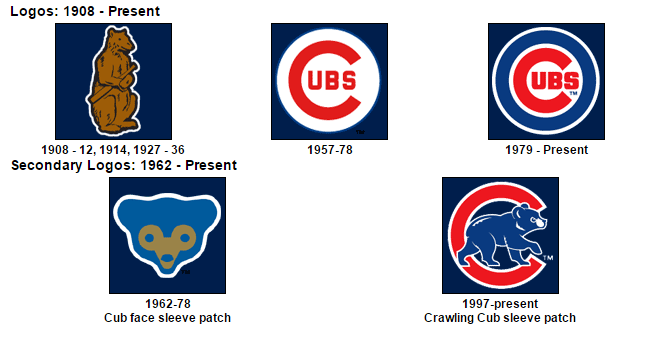 The identity of Chicago’s National League baseball team is ingrained that it would be hard to imagine the franchise being called anything but the Cubs; however, for the first quarter century of the team’s existence it wasn’t.

They were known at various times as the White Stockings, the Colts and even the Orphans.

The Chicago White Stockings were the city’s first professional baseball team. Then, when the team began to sell off its experienced players in the late 1880s, local newspapers began to refer to the club as Anson’s Colts, a reference to player-manager Cap Anson‘s roster of young and relatively inexperienced players.

By 1890, Colts had caught on and Chicago’s team had a new nickname. When Anson left the team in 1897, the Colts became known as the Orphans, about as depressing a nickname a team could ever be referred to as.

When Frank Selee took over managerial duties of Chicago’s youthful roster in 1902, a local newspaper dubbed the team the Cubs and the name not only stuck, but flourished. In 1906, the franchise set a Major League Baseball record by notching 116 wins, while posting a modern-era record winning percentage of .763. The team captured it’s only two World Series titles by going back-to-back in 1907 and 1908.

Currently the oldest active United States professional sports team, which has existed in the same city for their entire existence, the Cubs are about as well known a franchise as any in the game of baseball.

In 1900, Charles Comiskey moved the St. Paul Saints to the South Side of Chicago, establishing one of the American League’s eight charter franchises.

The team adopted the former nickname of its future rival and North Side nemesis, the Cubs, and become the White Stockings, which was shortened to White Sox shortly thereafter. The reasoning was rather simple, the team noticed the newspapers shortened their name to “Sox” in the headlines.

Originally the team played their games out of South Side Park. It wasn’t until 1910, the team moved into historic Comiskey Park, which they would call home for more than eight decades.

Early on, the White Sox were a very strong team, winning World Series titles in 1906 and 1917 before running into a bit of trouble a few years later. In 1919, the team was dubbed the “Black Sox” after a scandal broke out which involved accused a few prominent members of their roster for conspiring with gamblers to lose games on purpose.

In 2005, the White Sox brought home their third World Series after a drought of 88 years. For a town that loves baseball as much as Chicago, they’ve sure had to deal with a lot of losing.