Taylor Swift was featured in a Nashville Predators commercial in 2009. Does the image of Taylor Swift scream hockey to you? Well apparently it does in Nashville.

The article compares the Predators’ organization to an angry teenage girlfriend who takes to the internet every time her and her boyfriend have a fight. I mentioned in our chat that “The Predators are the Taylor Swift of the NHL”.

This got me thinking. I knew that Miss Swift grew up in Nashville, so I did a little research and found this gem.

The commercial features a teenage girl talking to her mother about attending a Predators game with the same amount of affection that she would use to describe a trip to The Gap or a tenth viewing of a Twilight movie. She describes the game in a way that a hockey game has probably never been described before stating:

“Oh my gosh Mom, the game last night was AMAZING, I mean the place was packed and everyone was there, I even saw Taylor Swift!”

You could substitute the word “game” with mall, spin the bottle party or Forever 21 and it would make a lot more sense. Notice that she makes sure to mention that the place was packed and everyone was there in a commercial pitch to buy tickets.

But then holy crap, Taylor Swift is sitting at the table, she was totally at the game and even does a cat hissing sound and a clawing motion for the camera, which I guess is the Predators’ fight symbol?

The commercial shows about three seconds of obscured hockey actually being played. It shows just about the least amount of hockey possible for a hockey commercial. It appears that the Predators were aiming for the teenage girl demographic with this one.

This commercial aired in February 2009 after the Super Bowl in Nashville according to Taylor Swift Online.

Taylor Swift became a spokesperson for the Nashville Predators. It seems like the perfect match. Miss Swift is known for her various breakup songs because John Mayer, Taylor Lautner, Joe Jonas, Harry Styles, Jack Gyllenhaal and many others totally did her wrong. The Nashville Predators management and organization also frustrated and hurt because the Blackhawks, Blues and Red Wings fan bases also totally did them wrong.

Taylor Swift gets very angry at all her exes as the songs inspired by them make her millions of dollars while the Predators management gets very offended when visiting fan-bases like the Blackhawks fill their stadium, buy beer and other concessions, also making them millions. 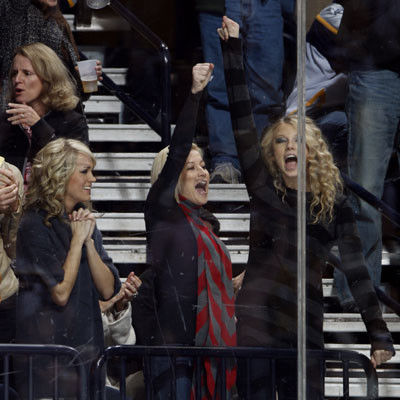 Underwood’s husband Mike Fisher plays for the Predators. Her most famous song involves using a baseball bat on her boyfriend’s car in addition to keying it, slashing the tires and carving the her name into the leather seats. Just saying.

Taylor Swift had a song in 2010 called “Mean” where she asks “Why you gotta be so mean?”. You can almost picture the Predators asking the Blackhawks faithful the same thing.  Stop being mean Blackhawks fans!

Miss Swift and the Predators organization should probably just take some me-time and focus on fixing themselves, because if you go through relationships like changing your underwear and if you are so worried about opposing fans filling up your stadium when your owns fans should be doing it, then maybe you’re the problem.