If you have been to a Blackhawks game during the 2014-2015 season, you may have noticed that the Ice Crew looks a little differently than they have in the past. As it was explained in this previous article, it appears as though the Chicago Blackhawks organization has listened to their fans and changed the uniforms of their beloved Ice Crew.

As you probably already know from a recent post “A Boobalicious Gallery of the Chicago Blackhawks Ice Girls, ” the skating women once had a uniform that looked something like this: 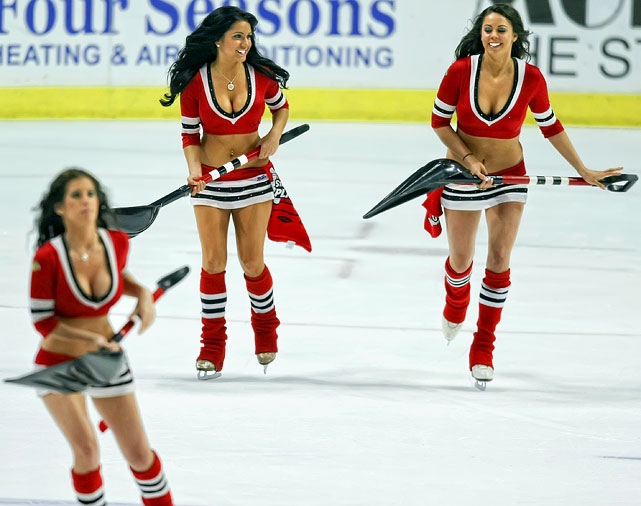 But some of the public took note of this, started to complain, and create a problem for all of the guys out there that loved the uniforms. Why? Because the uniforms are very revealing. They show the mid-drift of the woman’s body, as well as quite a bit of cleavage.

The female uniforms are no surprise, but with the Blackhawks becoming more relevant and now having more female fans, shouldn’t the ice crew should involve sexy men as well, so the women have something to look at too? It’s only fair, right?

Out With the Old, in With the New

Well, the Blackhawks decided to go a different route and get an entirely new uniform. As you can see, the new outfits are extremely different than the previous ones. Much less revealing and much more respectable.

Men’s Outfit’s Should be Similar to Women’s

As explained in a previous article on whether or not the Ice Crew would be in danger, I asked the question: What is more important to the Blackhawks organization? Having the girls prance around the ice with next to nothing on, or to keep their reputation and remain in good standing with some fans that may be offended?

If the girls wear such revealing outfits, then why don’t the men in the crew wear tank tops and cut-off shorts? Or just the opposite, simply have everyone wear the same uniform — track outfits and wind breakers.

Keep in mind that we all need to be cognizant of the messages we send to young women and the ideas we place in the minds of young men. Society has become so used to seeing ads that promote the “sex sells” attitude and people don’t even think about it anymore.

It’s hard to turn the TV on nowadays and go an entire three-minute commercial section and not see an ad that promotes some sort of sexual imagery. The Blackhawks are taking a stand and have changed the uniform to try and keep the focus on the players and the game of hockey, rather than the girls skating on the ice in skimpy outfits.

Now,  surely there will be some sort of fan outrage from all of the people excited to see the girls on the ice, (no, not the St. Louis Blues, the Ice Crew) but they will have to come to terms with the fact that the Blackhawks organization has to be smart. They have to keep the game of hockey respectable.

It is impossible to try and please everyone, but the Hawks have taken a step towards doing the “safe” thing. If they leave the women on the ice wearing the revealing clothing, they are bound to have some scrutiny for it. And yes, they will probably get people riled up about the new change, but its better for their image if they make the girls dress more classy, as opposed to the tight-fitting clothing that they’ve worn for so many years before.

Regardless of what a lot people may want, the Blackhawks will make decisions that are based on protecting the brand and image of the organization, and this move was made to do just that.