Twenty years ago today, the Chicago Bulls played their first game at the historic United Center.

A Scottie Pippen led Bulls team beat the Charlotte Hornets 89-83. Pippen led all scorers with 22 points in front of a crowd of 22, 313.

Ground was officially broken for construction on April 6, 1992 with the opening ceremony being held on August 18, 1994.

Since that date the United Center has hosted on average over 200 events per year, and been home to five championship teams between the Bulls and Blackhawks, who call the UC home.

In commemoration of today’s anniversary date we will be counting down the most unbelievable facts from the past 20 years. Since it’s opening in 1994, The UC has played host to the likes of The Rolling Stones, Paul McCartney, Ringling Brothers and Barnum & Bailey Circus, the 1996 Democratic National Convention, the Men’s NCAA Basketball Tournament, and more.

Chicago is widely regarded as one of the most historic wrestling cities in the world.

On September 4, 1911, Comiskey Park hosted what was at the time the largest live wrestling event in history with a gate total of $87, 000.

The match was between “Russian Lion” George Hackenshmidt and Frank Gotch for the World Heavyweight title.

Fitting that the first major event held at the United Center was SummerSlam ’94.

The main event was between two men under the moniker of Undertaker; Paul Bearer’s Undertaker, and Ted DiBiase’s Undertaker.

Bearer’s Undertaker would win the match after a few good ol’ tombstone pile drivers and throwing the DiBiase Undertaker in a casket– Just another day at the office. 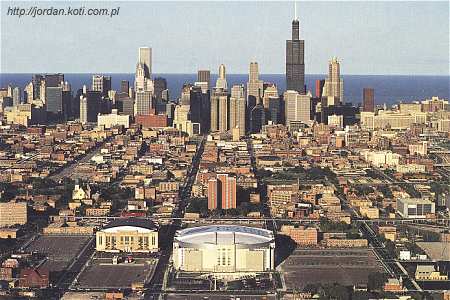 The United center is the largest arena in terms of physical size in the United States.

2. A River Runs Through It Did you know that located on the front of that statue is a quote from a Brad Pitt movie?

— “A River Runs Through It”

Michael Jordan led the Bulls to six championships in the 90’s, everyone knows that.

But, did you know that Michael Jordan’s home record at the United Center is 122-9?!

Not sure if that’s an all-time record or not, I had to count every win and loss myself just to verify that 122-9 was correct. If you want to count for yourself go on ahead, you might need to in order to believe it.