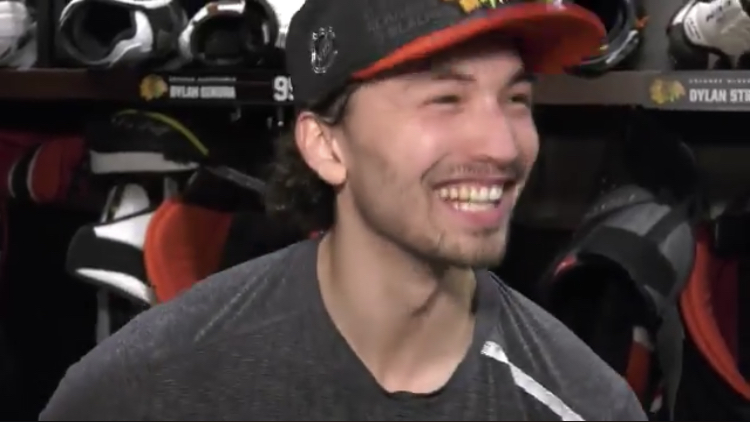 After falling behind 2-0, the Blackhawks gathered themselves and scored the final four goals of the game to secure the victory.

The Chicago Blackhawks defeated the lowly 10-win Detroit Red Wings 4-2 on Sunday night after trailing 2-0 through 20 minutes. With the win, the Blackhawks have now won six of their last eight games. Corey Crawford made 19 saves to earn the victory in his first start since being pulled on Dec. 23 vs. New Jersey.

“I didn’t really feel that great at the start,” Crawford said. “Got in between on plays sometimes. Just little details come easier when you’re playing. Just trying to get better as I go here.”

Filip Zadina opened the scoring on the powerplay just 3:21 into the contest by roofing a shot over Crawford’s left shoulder. Coming into Sunday, the Red Wings were 0-for-14 with a man advantage in their past five games. The Blackhawks have allowed powerplay goals in back-to-back games after going seven straight without surrendering a goal.

The Wings doubled their lead at 16:53 after Matthew Highmore turned the puck over and Luke Glendening redirected Patrik Nemeth’s shot from the point past Crawford. There wasn’t much the 35-year-old netminder could do on either Detroit goals.

Despite what the scoreboard said, coach Jeremy Colliton kept his team confident in the locker room after the first period. Colliton believed they were playing the right way, and the goals were going to come.

“Coach kept us calm,” forward Dylan Strome said. “He came in and said ‘We’re playing good.’ He thought we were doing the right things and the bounces were going to go our way. We all were pretty calm. We had to get the energy level up a bit, but we did that, and we had a great second (period) and great third.”

It took the Blackhawks longer than they hoped, but Strome finally cut Detroit’s lead in half late in the second period on a wrist shot from the left circle. Alex DeBrincat made a beautiful toe-drag move past a Wings defender to get open and find Strome all alone.

“I don’t have to listen to you guys ask me about it anymore,” Sikura said during his post-game interview with an enormous smile. “I waited a long time for that. As much as I tried to not let it affect me, obviously at the end of the day it’s going to and it’s going to hurt your confidence a little. Sometimes when you’re not scoring it kind of feels like you’re not doing much out there even if maybe you are. It’s nice to get that weight off my back and hopefully get a couple more here.”

Gustafsson set up Sikura with a wide-open net thanks to a Jimmy Howard rebound to tie the score 2-2. Patrick Kane picked up the secondary assist, and he now has 18 points (10G, 8A) in his past 11 games.

The momentum shifted in the Blackhawks favor during the final 10 minutes of the second period, and that seemed to carry over into the third. Right out of the gate, the Hawks were firing on all cylinders.

Adam Boqvist decided to break the tie at 8:47 to give the Blackhawks a 3-2 lead by skating around veteran Darren Helm and beating Howard with a wrist shot from the slot. The goal was Boqvist’s second of his career and first since Nov. 3 against Anaheim (15 games).

The Hawks remained aggressive throughout the remainder of the contest, as Detroit registered a mere eight shots on goal in the final period. Dominik Kubalik picked up the empty netter to seal the deal with 20 seconds for the 4-2 final. Kubalik deserved the goal after creating a screen in front of Howard on Boqvist’s game-winner. The 24-year-old rookie now has two goals and four assists in the last five games.

With the victory, the Blackhawks move to 19-18-6 on the season and remain five points back of a playoff spot. The Hawks also continue to have Detroit’s number, as they’re 20-4-4 in the last 28 games against the Wings.

Overall, it was a nerve-wracking but essential win at home for the Blackhawks. Losing to the Red Wings, who are now 10-30-3, would have been a tough pill to swallow. Instead, it’s another two points for a team that has begun to get on a bit of a roll lately.

The Blackhawks are back in action at the United Center on Tuesday against a Calgary Flames team they played just one week prior. The Flames are still the team the Blackhawks are chasing in the standings, as Calgary currently holds the second wild-card spot. The Flames are 22-17-5 on the season and are coming off an impressive 5-4 shootout victory on the road in Minnesota. The contest is slated for 7:30 p.m. CT and is scheduled to be on NBCSCH and SNW.