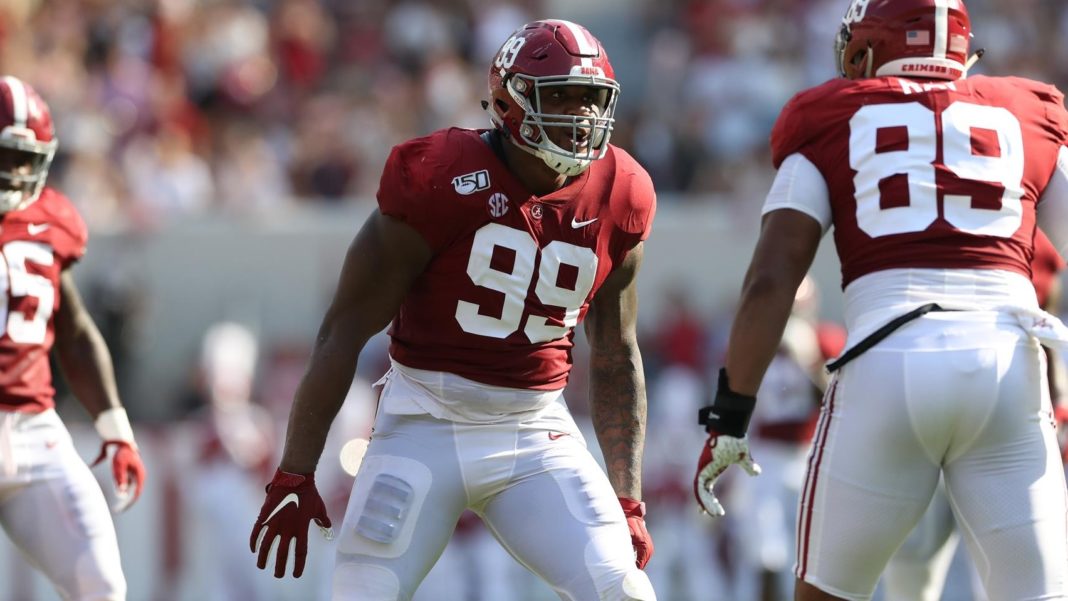 The last Chicago Bears 2020 mock offseason was pretty much an entire focus on how the team could reforge the offense around a new quarterback. Yet as is so often the case, things change fast in the NFL. Just like that, Mitch Trubisky is stating his case in no uncertain terms that he is and will remain the guy under center for this team next year. In the past eight quarters of football, he’s accounted for nine touchdowns. The Bears have won four of their last five games and suddenly have a ton of momentum with three to play.

If he continues at or near this level through the finish, it’s safe to say he’ll be the starter next year. At that point, the priorities for GM Ryan Pace and his front office almost certainly shift. No longer will they have to focus on finding a new quarterback. They can deploy the limited resources they have towards improving the rest of the roster while there is still one cheap year left on Trubisky’s rookie contract.

How might they go about it? Here is a breakdown of the process as it could go.

It’s been a sad trudge the past few years for Long. He’s watched a once-bright career steadily fall apart due to one injury after another. He can’t stay healthy and the Bears have reached that point where they can’t wait for him anymore. It’s time to move on and put that money into more pressing areas of need.

Amukamara was terrific in 2018. He’s been merely okay in 2019. Is okay worth $8.1 million? Honestly no. While the cornerback is a locker room leader and still adequate player, the Bears don’t have a lot of money to throw around. They need to find it somewhere. Sacrificing him is necessary, if not totally desired.

This is hardly a surprise. Shaheen will probably go down as one of the worst picks Pace ever makes as GM in Chicago and maybe one of the worst 2nd round picks in Bears history. He came in with plenty of hype as a big, athletic target and has produced next to nothing in three years.

The Bears have to find a way to rid themselves of Burton and his injury-prone headaches. Their best way of doing that is via trade. The problem is nobody will take him at this point. So Chicago decides to package a draft pick with him to Indianapolis as a pure salary dump. They get out of his contract and he reunites with a familiar face in Frank Reich with the Colts.

Taylor Gabriel to the 49ers for a 6th round pick

Is it any coincidence that the Bears offense has functioned better after Gabriel went out of the lineup with an injury? Maybe, but the fact is the undersized receiver hasn’t played up to good enough standards in 2019. He’s dropping too many passes and isn’t proving to be any better than Anthony Miller who is outperforming him. The 49ers love receivers with speed and Gabriel has connections to their head coach Kyle Shanahan.

Chicago is left with a tough decision. Do they keep Danny Trevathan who is entering his 30s and coming off a nasty injury or do they take a risk on extending Kwiatkoski and making him the starter next to Roquan Smith? They decide to ride with the youngster, who costs them a manageable $7 million a year in hopes he can continue to stay productive.

Everybody knows this is coming. Jackson may not have the same production as 2018 but watching the tape shows he is still one of the best safeties in the NFL and maybe even more well-rounded than he was last season. The Bears have to make sure they keep him on the back end of their secondary long-term because that is somebody you can’t replace.

If the Bears don’t move to extend Robinson at this point, they’re idiots. He has been the most consistent and productive offensive weapon they have. A master route runner with size and hands who is the ideal safety valve for Trubisky. It will be expensive to keep him around but he’s proven worth every penny necessary. The guy should be a Pro Bowler this season as he closes in on the 1,000-yard mark.

The nature of this move by the Bears is to knock down Floyd’s 2020 cap hit while securing him to a nice extension. It renegotiates to where he will make $7 million per year, which puts him in line with what Terrell Suggs is making in Arizona. Given his limited sack production in 2019, this is a more than fair deal that keeps a solid, versatile player on defense while freeing up some needed cap space.

Williams has become a fun story for the Bears. A journeyman defensive lineman, he found his way to Chicago after stops in Pittsburgh and Kansas City. There he worked his way up the depth chart and has blossomed into a quality rotational player with six sacks this season. So the team rewards him with a nice long-term deal at $4 million per year.

His season didn’t end how he wanted, but McManis again proved that he remains one of the best special teams players in the league. The Bears would be wise to keep him around until that is no longer the case.

He remains a solid rotational defensive end with pass rushing capability. He may never be a true sack artist but Robertson-Harris has value worth keeping around for one more year at a decent price.

His sliding into the right guard spot was abrupt after Kyle Long was injured but Coward has shown steady improvement since then. He brings an edge to the position in the run game and has looked a lot better of late in pass protection. Bringing him back isn’t a hard decision.

Solid backups are hard to find. Credit the Bears for getting one at tackle. Lucas has been a nice revelation in place of Bobby Massie. There’s no reason not to bring him back on a minor pay raise.

Another of those quality cheap free agents that Pace seems so good at finding. Not only is Pierre-Louis a steady contributor on special teams, he’s proven rather adept when filling in on defense as well. With Trevathan gone, keeping the depth strong is a must.

The Bears literally picked him up off the scrap heap when nobody else wanted him. He has since become not only their “fullback” but also an unexpected weapon in the passing game. It will be interesting to see what they do with him moving forward.

Scales has remained steady and dependable at long snapper every year. There’s no reason to think he needs replacing. Just give him a minor pay raise and let’s move along.

Trubisky doesn’t need expensive competition, but he does need a reminder that the Bears are watching. Keenum has loads of starting experience and has played really well at times in the past. He’s the perfect choice for the backup spot where he can step in if necessary but also push the Bears’ young quarterback if he starts to get lazy with his work ethic.

The former 1st round pick has endured a lot in terms of injuries. The fact he’s still playing and finding ways to be productive is a testament to his mental toughness. He can still be an athletic weapon in the passing game. The Bears decide to take him on a one-year deal to see if he’s worth a more long-term investment.

Probably one of the more underrated pass rushers of the past several years. Mercilus has quietly produced 48 sacks during his career in Houston despite being relegated to the sidelines for much of the past few years by Jadeveon Clowney. When he has somebody great to rush across from (J.J. Watt), he gets to the quarterback.

Burris was forced into the starting lineup earlier this season as injuries struck the Cleveland cornerback position. All things considered, he handled himself well. In 10 games he had two interceptions and four passes defended. Quarterbacks had a 99 passer rating when throwing at him. He also has value as a blitzer with a sack and three pressures.

Losing Ha Ha Clinton-Dix is tough given how well he’s played in 2019, but it’s also expected. The Bears just can’t afford to pay him what he’s worth. It’s a surprise teams haven’t paid Boston more. He’s been a steady producer for the past couple of years and is doing it again with two interceptions and 57 tackles in 12 games for Carolina. The Bears managed to plug the Clinton-Dix void with him thanks to almost doubling what he made with the Panthers.

Killebrew is not only a decent backup safety in Detroit, but he’s also one of the best special teams aces in the NFL. Through Week 13, he is tied for second in the league with 12 special teams tackles. Players like that have value.

The Bears have desperately searched for a tight end who can be a legitimate threat in the passing game beyond the occasional screen pass or red zone catch. Hopkins exhibits the exact sort of skill set they’re looking for. What he might lack as a true blocker he makes up for in speed, route running, size, and excellent hands. He just has a feel for finding the open spots in a defense and creating chunk plays through the air.

The loss of Akiem Hicks hit the Bears front seven hard. The fact that he’s drawing closer to his 30th birthday also raises concerns. It might be best for them to start thinking about a future beyond him. Davis was a monster in 2017 with 10.5 sacks. So his upside as a big 3-4 pass rusher is there. Combine that with his outstanding size and run-stopping power and he can easily become the future for this defense up front.

Virginia always tends to put up good defenders and Hall is no exception. He was starting to play like one of the better cornerbacks in the country before an ankle injury ended his 2019 season after six games. He’s got size and length to go with intelligence and instincts. He’ll man up on any wide receiver and play them tough.

Trubisky may have saved his job for 2020, but that doesn’t mean the Bears should be entirely comfortable yet. The best thing for them to do is add some “incentive” on the depth chart for him to stay focused. They already secured a solid veteran backup in Keenum. Now they get a talented project in Anthony Gordon who has the size, arm, and poise of a future NFL starter if given enough time to develop.

Adding more punch to their ground game should be on the agenda for the Bears. Pace likes his Georgia products and Solomon Kindley fits the mold of what they’re looking for. He has good size and brings noteworthy power and nastiness to his game. If he cleans up some technique issues (and drops a bit of weight) he can be a future starter.

Think of him as the Ohio State version of Javon Wims. Seldom-used during most of his time in college but has flashed consistently when given opportunities. He’s every bit of 6’4 with underrated speed. Given the same developmental approach as Wims, he can become a solid contributor.

The athleticism isn’t there for Jones to be a pure 3-4 linebacker. However, his motor and natural pass rushing instinct are hard to ignore. He has a good first step, length, power, and ability to use his hands effectively to create opportunities to sack the quarterback.