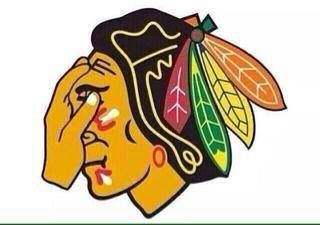 The Blackhawks will roll with 11 forwards and six defensemen against the defending Stanley Cup champions due to injury.

After back-to-back embarrassing losses to the Colorado Avalanche this past weekend, things don’t get much easier for the Chicago Blackhawks in the upcoming games. The 17-5-6 St. Louis Blues come to the United Center on Monday night, then the Blackhawks will travel to Boston to take on the Bruins, who are currently 11-0-4 at home this season.

To make matters worse, the Blackhawks are currently decimated by injuries. They will play one skater short against the Blues after two players were unexpectedly added to the injury report on Monday morning. Due to financial reasons, the Blackhawks are unable to recall a skater from their AHL affiliate Rockford IceHogs.

Here’s a quick look at the Blackhawks injury report:

According to Cap Friendly, the Blackhawks have just $362,499 in cap space as of Monday. Stan Bowman’s hands are tied in this situation, so the Hawks will have to dress only 17 skaters against the Blues. Dressing 17 skaters isn’t something that happens often in the NHL, but according to coach Jeremy Colliton, it’s not uncommon in the AHL.

“Happens all the time in the American League,” Colliton said. “Guys will get to play more. We haven’t played since Saturday and we don’t play again until Thursday. So of course, there are guys missing we’d love to have, but it’s no excuse.”

The Blackhawks will need to give their best effort, especially with a man down, in order to pick up a much-needed two points on Monday night vs. St. Louis.