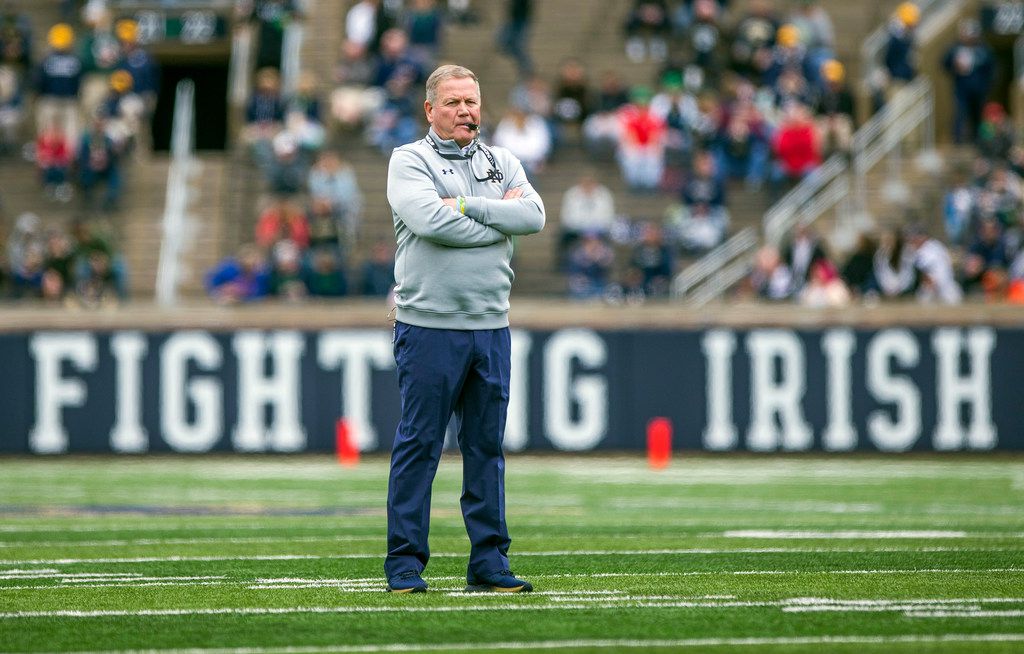 Notre Dame was built on tradition. A tradition of excellence – where student comes before athlete. The fan base, including myself sometimes needs to step back and remember why we root for them in the first place.

However, the once amateur, collegiate sport has transformed into a spectacle.

The game ain’t the same as it used to be – but when you continuously see how lopsided the scales are for the teams in the upper echelon – it starts to take take a toll on fans.

For instance, it seems over the past decade Alabama has had a stranglehold over the national spotlight for college football – Bama’ has won five national titles since 2009 and Clemson has posed to be the only real threat to them with two.

I have seen tremendous frustration for teams that just have not made the leap from a great team to a powerhouse. Hell, even Crimson Tide fans were calling for hall of fame HC Nick Saban, perhaps the best coach of the modern era– to be fired after coming up short against a scary good LSU football team.

Of course, the same criticism has been directed at the administration at the University of Notre Dame regarding ten year head coach, Brian Kelly.

How We Got To Kelly

Let me begin by saying we do not even know how good we have it today compared to the majority of college football programs around the nation.

Yet, we continue to want more – something we can thank the old ball coach for.

When Kelly took over in 2010, Charlie Weis had run the program into the ground.

The irony of it was, Lou Holtz’s recruits spring boarded Bob Davie into two 9-3 seasons – The Irish hired Tyrone Willingham in 2002, and with Davie’s recruits had a single 10-3 season before ultimately handing over the reins to Weis.

Weis – with Willingham’s recruits had went 19-6 in his first two seasons before plummeting in 2007 which included breaking the 43 game winning streak against Navy. Then, after Kelly’s perfect 2009 season in Cincinnati, he was announced head coaching of the Fighting Irish for 2010.

The Kelly era started off with a shocking tragedy when 20 year old junior, Declan Sullivan – a student manager who was filming the Irish practice atop a scissor lift, died of injuries sustained when the lift was blown over by 50+ mile per hour winds.

Sullivan left chilling messages via his twitter sarcastically saying, “I guess I’ve lived long enough” followed by his detail of how terrifying it was.

While I did not have a personal relationship, I did have close friends in the Lake Zurich, IL community, where Sullivan went to high school, that were deeply affected.

This horrific event has led to massive investments by the university – which I will touch on more in a bit.

As a team, the Irish finished a mediocre 8-5. The following year, Kelly seemingly made little progress getting the same result. They had some young pieces over the past two seasons that were finally starting to develop. Tommy Rees, who has since become the QB coach, was the best option they had after Dayne Crist turned out to be a total five star bust.

The 2012 season was special. The Irish had finally rose to the top – we were BACK!

Kelly, now in year three leads the Irish to a perfect 12-0 – only to be trounced by a team with Eddie Lacy, TJ Yeldon and Kenyan Drake in the backfield. That year those three players combined for 43 total touchdowns.

It seems it was downhill from there.

Later on, the sanctions came down from the NCAA due to findings that the Golden Standard that Notre Dame worked so hard to uphold, was tarnished.

It was discovered that a student-trainer was doing homework for two Notre Dame players. As a punch to the gut, 21 wins between 2012 & 2013 were vacated, despite the Irish being forthcoming of the academic misconduct.

2013 just felt like a major let down – despite a 9-4 finish.  Notre Dame lost to Michigan, Oklahoma and Stanford – all ranked teams – but in Notre Dame like fashion – one week after jumping back into the top 25, the Irish fell to Pitt. They would finish 25th the year following the championship loss.

Naturally, only two years removed – 2014 & 15 had similar expectations. While we found a way to blank the Michigan Wolverines 31-0, the heart breaking loss in to the Florida State Seminoles in Tallahassee put the season into a tailspin. The Irish started the 2014 season with six straight victories and would later end the year unranked. What a letdown.

Notre Dame had established itself somehow as the 11th ranked team heading in to 2015 – and had some narrow escapes – but was able to hang with Clemson in Death Valley falling short – similar to how they lost against Florida State the year prior.

Eventually, the Irish would dance with the Stanford Cardinal – but fall short losing by two points. A win would have potentially propelled Notre Dame into the College Football Playoff – but instead we took the beating from the Ohio State Buckeyes instead of Alabama.

I will never understand the 2016 season. The offense was full of talent and the defense – though young, was loaded with now NFL players. I do believe that Brian VanGorder was really that bad but they let him go after starting 1-3.

The Irish went on despite having a powerful cast, to a 4-8 season. This was the worst record of Kelly’s 16-year career.

What happens next is hard to explain, because we are still within it.

It was almost as if the Irish needed the kick in the ass to wake up – and 2016 did that.

In 2017, the Irish responded by going toe-to-toe with the Georgia Bulldogs in a game many thought the Irish would be destroyed.

Soon after they traveled to Michigan State and in a hostile environment won convincingly.

They left East Lansing with a 22nd overall ranking and things really took off from there.

Josh Adams was a legitimate Heisman candidate and 33 was trucking. I went to two games that season. At Michigan State & at home against USC.  First hand, I can say the both of these games, against our rivals – were amazing experiences.

Notre Dame Stadium had just been remodeled as part of a major renovation project – a video board was even added to the end zone – Old Notre Dame was finally catching up with the changing landscape of college football.

Somehow, amongst all of the hype – Notre Dame was obliterated in Miami.

It was the most frustrating loss since Alabama in 2012. Losing happens – but typically, the Irish have a chance at the end.

Notre Dame was outclassed from start to finish.

Then, another season ended at the hands of Stanford.

The Rise of Ian Book

For me, the Citrus Bowl against LSU was one of the sweetest victories I can remember. Albeit the day I proposed to my now wife, the Irish had a flash of excellence from an unsuspecting sophomore. Book was substituted in to replace the ineffective Brandon Wimbush.

Book led the fourth quarter comeback, with the incredible catch by Miles Boykin to send the Tigers home empty handed.

Right then, Book earned his stripes – at least for me.

By now, I have uncovered a fatal flaw in the Kelly Era.

It’s like bad news, it comes in threes (See Triaphilia)

Of course, the year began as well as any year could. A win over Michigan but from there Wimbush barley eked by Ball State and Vanderbilt before Kelly handed Book the keys.

Book was sensational – the marque wins being over Stanford and at Virginia Tech in prime time. For the first time, I, like most fans, thought  “this is the year we can finally WIN the big game.”

Hope was on the horizon when the Fighting Irish survived a trip out to Southern California in the season finale, but were later dismantled by Clemson in the first round of the College Football Playoff.

Here we are again – coming off a perfect regular season and expecting a repeat.

Notre Dame unveiled a world-class practice facility since the Loftus Sports Center was a scheduling nightmare and led to constant conflicts between other teams on campus.

The new facility is said to be the University of Notre Dame’s response to the College Football Arm’s Race. Basically the pissing match for the most absurd locker rooms and facilities, all to attract future talent.

Kelly mentioned in his weekly show that UND decided to take a team approach instead of investing in a locker room with individual amenities.

On the field though, Kelly and the Irish seemed to come out of the gate a bit slow.

Louisville has proven to be a formidable opponent but at the time, it raised some caution flags.

Book looks unsettled. Why does he run first? Where is the pass rush? Why can’t we stop Jawon Pass?

Notre Dame just did not do enough to win when they went to Athens to face off against the Georgia Bulldogs in an epic rematch of the 2017 game.

Let us just skip over the fact we lost to Michigan – I think we all wish we could. This will go down as Kelly’s second worst loss. Sure – he has lost to lesser teams but not by this margin and not when the arrow was pointing up for the Irish.

I still maintain that the Miami loss was worse given the circumstances. Though, I would be lying if I did not say the Michigan loss hurts ten times more.

To avoid beating the dead horse, it was just an abysmal showing and the Irish have since been paying the price with the AP Poll & College Football Playoff Committee remaining stagnant since suffering the loss.

The jury is still out on the final regular season tilt against Stanford and exactly what bowl game Notre Dame will be playing in but they are on the up riding a four game win streak.

Only four coaches in the history of Notre Dame have ever coached for an entire decade.

Knute Rockne was the longest tenured coach with 13 seasons – he led the Irish to three championships and a .881 winning percentage.

Additionally, three coaches tie with 11 seasons as the headman, Frank Leahy finished with four titles and a .855 WP, Ara Parseghian two titles .836 WP and Holtz with a single championship and .765 WP.

As of today, Kelly is nearly through his tenth year with zero championships, and a .709 WP.

Over the past three seasons, the Irish have combined for a record of 31-6.  Currently Holtz has the most wins by any Irish team over a three-year span with 33-4.

As of today, the Kelly Era is far from over. Do not be surprised if Kelly cements himself as the all-time leader in wins over the next few seasons. Especially with incoming recruiting class quality at an all-time high with guys like Tyler Buchner

Pissed off fans will always call for the coaches to be fired. The only thing that silences the critics is winning.

Right now, the legacy of Kelly is “good-not-great” when lined up next to the legends of Notre Dame. However, they do say history tends to repeat itself. In the roaring twenties, nearly 100 years ago – Notre Dame went 93-11 with three national titles.