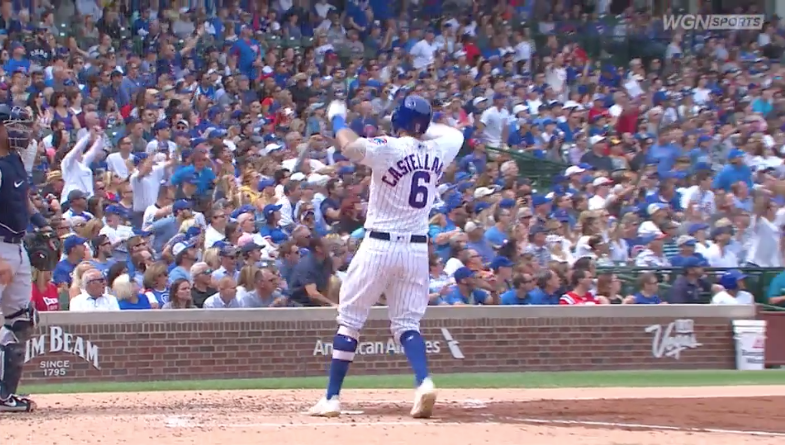 Free agency isn’t going to pick up steam until early December, so in the meantime all we can do is go over some projections and debate who the Cubs should go after and so on.

But before we fully dive into free agency, let’s take a look at the top Cubs free agents and what their projected deals could be. By the end, you can certainly make the case the Cubs should re-sign a few of them.

Here are all the major Cubs free agents from their 2019 roster.

Yet, out of the 13 Cubs free agents we’re just going to focus on the top guys who are either in the top-50 free agents lists by FanGraphs or MLB Trade Rumors. Those are Nick Castellanos, Cole Hamels, Steve Cishek and Pedro Strop.

First up, Nick Castellanos. Here’s his contract projection from FanGraphs.

And MLB Trade Rumors has a similar prediction.

Nicholas Castellanos – Four years, $58MM.
Castellanos is the best outfield bat on the market this winter. His 126 wRC+ over the past two seasons ranks 26th in baseball, only a bit shy of big names like Kris Bryant, Paul Goldschmidt, Nolan Arenado, and Bryce Harper. Playing in cavernous Comerica Park, Castellanos never reached 30 home runs in a season, but he led MLB in doubles this year and ranked fifth last year. The Tigers sent Castellanos to the Cubs at the trade deadline this year, which ended up having dual benefits: it erased his qualifying offer eligibility, and he went absolutely nuts with a 154 wRC+ and 16 home runs for Chicago in 225 plate appearances. Plus, Castellanos doesn’t turn 28 until March, making him the youngest prominent free agent and 15 months younger than Marcell Ozuna.

The Cubs and Castellanos reportedly have a mutual interest in a reunion on the North Side.

Castellanos does not have a draft pick compensation attached to him in free agency. Neither does Cole Hamels, who did not get the $17.8 million qualifying from the Cubs.

And like Castellanos, MLBTR estimate is pretty close to the one provided by FanGraphs.

Cole Hamels – Two years, $30MM.
Hamels is headed toward the twilight of his career, with his 36th birthday around the corner. The southpaw change-up artist has an admirable career record. His 39.3 WAR from 2007-15 ranks sixth in MLB, nudged between likely Hall of Famers Justin Verlander, Zack Greinke and CC Sabathia. Hamels is still an above average starting pitcher, as evidenced by a 3.30 ERA in 39 starts for the Cubs since they traded for him at last year’s deadline. His Chicago renaissance was in full swing for his first 16 starts of 2019, featuring a 2.92 ERA, but an oblique strain in late June knocked him out for over a month. Hamels posted a 5.79 ERA in 10 starts after his return, creating some cause for concern.

Finally, while Cishek and Strop didn’t crack the top-50 free agents list on FanGraphs they did make it on the MLBTR list. Here are their contract projections.

Steve Cishek – Diamondbacks.  Two years, $10MM.
The sidearming Cishek has a 2.52 ERA over the past four seasons, second only to Kenley Jansen during that time. Cishek’s strikeout and walk rates have been moving in the wrong direction, but he’s a high spin rate guy whose success comes from weak contact. He ranks in the 99th percentile in terms of opponent exit velocity and hard-hit percentage, in fact; this year, Cishek’s average exit velocity of 84.5 miles per hour ranked fourth in all of MLB.

Pedro Strop – Red Sox.  One year, $5MM.
Coming to Chicago with Jake Arrieta in the Cubs’ franchise-altering trade with Baltimore, Strop cemented his place in Cubs lore with a 2.82 ERA over 373 innings spanning parts of seven seasons. His stretch from 2014-18 placed him in the top 15 in MLB in ERA, strikeout rate, and ground-ball rate for relievers. Strop faltered with a 4.97 ERA and reduced velocity this year, possibly due in part to IL stints for hamstring and neck injuries. The 34-year-old righty could easily bounce back in 2020 and should garner widespread interest.

So, Cubs fans, out of those four free agents, who do you want back the most?