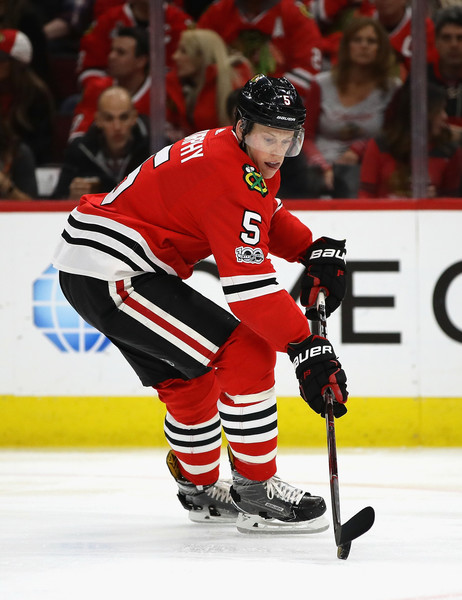 Since returning from injury on Nov. 16, Connor Murphy has spent most games on the Blackhawks’ third defensive pairing with Olli Maatta.

The Chicago Blackhawks have played just 23 games so far this season, but it’s already been a year filled with ups and downs. Nine different defensemen have suited up for a game, and the forward groups are just now beginning to build some chemistry. There hasn’t been a whole lot of consistency in the Blackhawks play.

As the season quietly creeps toward the thick of winter, games start to become more and more meaningful. With a subpar 9-9-5 record through the first quarter of the season, the Blackhawks don’t have much longer to figure out what kind of team they are. Enough with the sporadic lineup changes and peculiar defensive pairings. It’s time for coach Jeremy Colliton to play the Blackhawks best lineup every night.

Looking at the Blackhawks defense, Colliton has yet to find consistency from the three different pairings. Only Duncan Keith has remained in the same spot for the majority of the season. The rest of the defense has been a carousel of players from game to game. Lately, the Blackhawks have been rolling with Keith-Gustafsson, de Haan-Seabrook, and Maatta-Murphy on the backend.

To much surprise, Erik Gustafsson has remained on the top defensive pairing since Connor Murphy returned from injury on Nov. 16 against Nashville. Before the injury, Murphy was paired with Keith to form the Blackhawks shutdown pairing. Keith and Murphy had much success together, as the two have a 55.19 CF% in 88:31 together this season according to Natural Stat Trick. That’s the highest Corsi-for percentage the Blackhawks have between any two defensemen with more than 30 minutes together.

Looking at the Keith-Gustafsson pairing, they have a 43.94 CF% in 170:12 together, which is one of the worst tandems the Blackhawks have. Over 170 minutes of ice time is a large enough sample size to confirm that Gustafsson shouldn’t be playing on the top pairing with Keith. Especially with the success that Keith and Murphy have had this season.

If the Blackhawks do decide to move Murphy back with Keith (and they should), that would likely put Gustafsson on the third pairing with Olli Maatta. Colliton hasn’t played Gustafsson with Maatta very often this season (just 40:21 together), but they’ve done well in their short time together with a 50.00 CF%. Maatta’s only produced a better CF% with Keith, so placing him and Gustafsson together may not be such a bad idea.

The Blackhawks are currently 13th out of 15 teams in the Western Conference and have some crucial divisional games coming up. It’s still early in the season, but there needs to be a sense of urgency surrounding the Blackhawks. It’s time for Jeremy Colliton to go with what works, and that’s a top defensive pairing of Keith and Murphy. Erik Gustafsson isn’t a top-pairing defenseman on a playoff team, and that should be obvious at this point. Gustafsson can still impact the game in a lesser role due to his abilities with the man advantage. It only makes sense for the Blackhawks to reunite Connor Murphy and Duncan Keith.

For more Blackhawks news and updates, follow the author (@JackBushman2) on Twitter. Make sure to check out the author’s podcast, Talkin Hawkey, which can be found on Apple Podcasts, Spotify, and Twitter @TalkinHawkey).