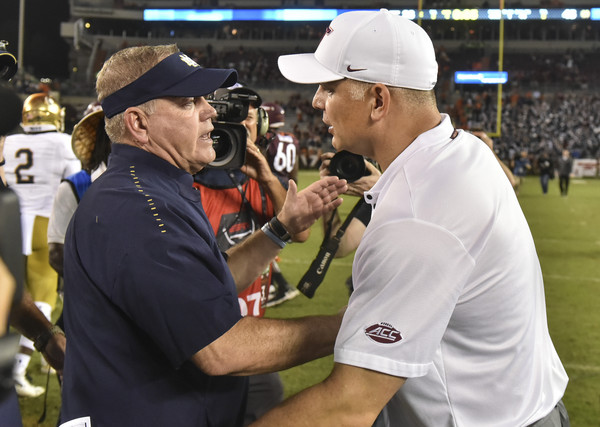 Brian Kelly and the Fighting Irish are in a unique position ahead of Saturday’s game against Virginia Tech. Both teams sit at 5-2, but the Irish are -17.5 favorites.

Kelly though, has an opportunity to restore the faith in Notre Dame football while a loss will put some serious heat under the coaches seat. The Irish had more questions than answers following last weeks loss – the biggest being where does Notre Dame go from here?

The Man Across The Field

The Hokies are coached by Justin Fuente. Fuente’s had been an offensive coordinator at TCU before heading to Memphis. Fuentes finished 26-23 at Memphis. This ended a 41 year draught at Memphis for a coach to leave with a winning record. This was good enough to land Fuente’s a position as the head man at Virginia Tech.

So far the Hokies are 30-17 under his direction. He was also been named ACC Coach of the Year in 2016, his first season at VT.

Fuente’s replaced legendary coach Frank Beamer – Beamer had been the coach since 1987 – so Fuente’s certainly had some big shoes to fill.

In 2016, Fuente’s led the Hokies into Notre Dame stadium and defeated the Irish. Admittedly, this was Kelly’s worst season as Notre Dame’s head coach and VT finished that year with a loss to Clemson in the ACC Conference Championship.

In 2018, Kelly returned the favor in a prime time game in Blacksburg, VA.

Notre Dame took care of business in a hostile environment, led by the same man under center, Ian Book.

The star of that 45-23 victory was Dexter Williams who broke of an insane 97 yard touchdown.

Book finished that game 25-35 with 271 yards and two touchdown passes, both to Miles Boykin.

This will be the rubber match between both teams – the road team has won in both instances.

With the loss last weekend, coach Kelly’s win percentage dropped to .699. He’s now in his 10th season as the head coach of Notre Dame.

In this time, he has brought the Irish back to one national championship appearance as well as a college football playoff appearance.

Kelly’s team appeared unready, ill prepared and over matched on all sides of the ball in these games. The Irish were outscored 72-17 in those contests combined.

If you add in the result of last week’s disappointing loss the deficit grows, 117-31. I do not have to tell you that is not going to cut it.

Kelly just has to get better – there is no way around the fact. He will need to win convincingly to take the heat off and it starts with Virginia Tech.’

If Kelly loses, it is going to become far more difficult to defend. There is no question Kelly is a great college football coach – but for now Kelly is at a crossroads.

Should the University of Notre Dame’s administration need to part ways, reports have surfaced about a Florida State job, or perhaps even a candidate for rival, USC.