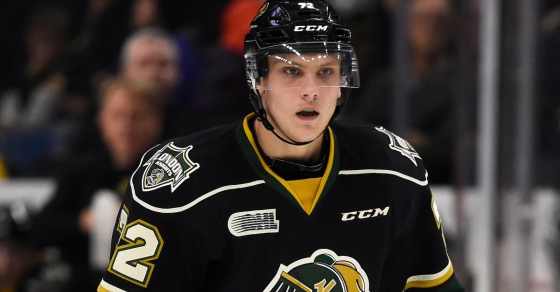 The Blackhawks acquired the 19-year-old defenseman via trade with the Detroit Red Wings in exchange for Brendan Perlini.

The Chicago Blackhawks have signed defenseman Alec Regula to a three-year contract, the team announced on Monday afternoon. The entry-level deal is worth $879,500 per year.

Regula, a 6-foot-4, 205-pound blueliner, has seven goals and 15 points in 14 OHL games with the London Knights this season. The Blackhawks likely drew interest in Regula while watching Adam Boqvist play for London last year. Boqvist spoke highly of his former teammate in an interview after Regula was acquired.

“He’s pretty much an all-around d-man, but a little bit more stay-at-home,” Boqvist told reporters. “He can score and be on the powerplay as well, so I think he’ll be good with the Blackhawks.”

Regula will likely remain with the London Knights for the remainder of the season, but no official decision has been made by the Blackhawks. The 2018 third-round pick is currently serving as co-captain of the Knights along with Columbus Blue Jackets 2018 first-round pick Liam Foudy.