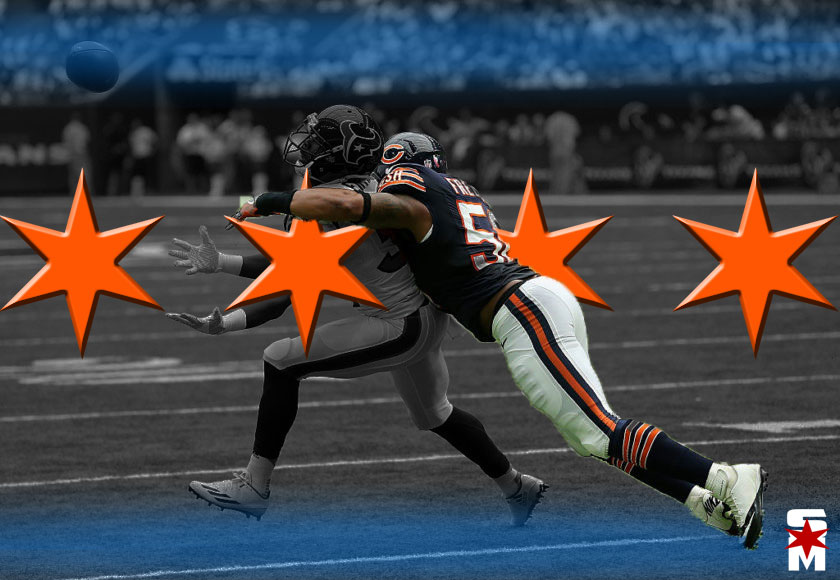 The great Chicago Bears defenses of the past all have something in common. At their peaks, they were headlined by at least one outstanding linebacker. From Bill George, to Dick Butkus, to Mike Singletary to Brian Urlacher the tradition is richer than any other franchise in NFL history. It’s not even close. So it was just a matter of time before Chicago saw excellent linebacker play return.

Seems at least one man has embraced the Monsters of the Midway tradition right out of the gate. Jerrell Freeman, a free agent signing from Indianapolis who played three years in Canada has emerged to become one of the best inside linebackers in football. He proved it in the opener against the Houston Texans when he delivered an incredible 17 tackles.

The performance earned him honors as one of the best linebackers of Week One, in the entire NFL, according to Pro Football Focus. Freeman was listed in their recent article titled “Best Player At Every Position In NFL Week 1, ” with a player grade of  86.7! Here’s what the excerpt said, only Jordan Hicks of the Eagles had a higher score for linebacker:

“Only Kwon Alexander (15) posted more solo tackles among LBs this week than Freeman’s 13 according to PFF’s tally, and Freeman actually added four assists to Alexander’s one to take the lead overall. Eight of those tackles were defensive stops, as he showed the kind of work rate that the Bears craved this offseason.”

How good did he play? The numbers don’t even do his performance justice. He was everywhere. In addition to making tackles he was also a presence in pass coverage, helping to limit gains on underneath throws.

This video clip shows exactly why the Bears made an effort to sign him when he inexplicably became available. Freeman isn’t just fast and athletic for a linebacker. What sets him apart is his instinct. He often gets a jump on plays because he can identify what’s coming before the snap like this tremendous individual effort illustrates.

This is why Jerrell Freeman was signed. #Bears pic.twitter.com/MaoWDLXnM4

It’s a classic screen pass swing out to the right. Most linebackers would’ve not met the running back until at least the line of scrimmage on that play. Freeman was so on top of it from the start that he was breaking to the football even before it was out of the hand of Brock Osweiler. Then he makes the tackle in the open field without any help. That is so difficult to do in pro football.

What makes it even better is that Freeman won’t be by himself. The Chicago Bears signed another underrated linebacker who had himself a game in Houston. Danny Trevathan was actually signed first back in March and he delivered 11 tackles and a sack against the Texans. It’s almost impossible to describe how much better those two make the defense.

Urban Gameday brings the fearless defense by incorporating the popular “Monster of the Midway” phrase into this instant classic t-shirt.

One thing about great linebackers is they can cover up for the mistakes of other teammates. Any time a tackle was missed or an assignment blown, their speed and quick reaction often prevented big plays from happening. It’s the same that Urlacher and Briggs did for years during their heyday and so on through the ages.

Don’t be surprised when Jerrell Freeman upholds another tradition when he becomes another Bears linebacker to make the Pro Bowl. That would be his first, and long overdue.

Is this the return of the “Monsters of the Midway, ” Bears fans can only hope.